The Croatian National Tourist Board reports that one of the most-watched commercial Belgian television companies, VTM, published a two-minute bit in Tuesday evening’s news highlighting Croatia as a “corona free” destination. 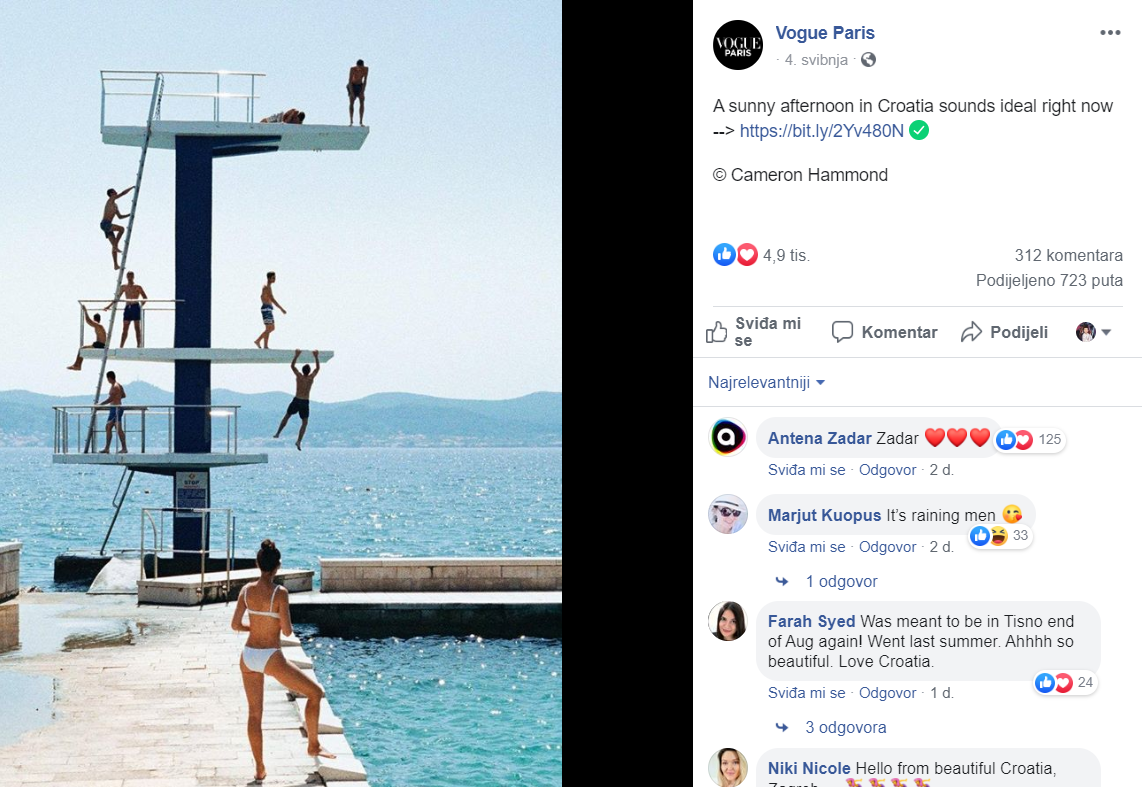 The video states that some countries, such as Croatia, Greece, and Portugal, have an excellent situation related to the coronavirus pandemic, which was accompanied by images of the Croatian coast and islands from the latest Croatian National Tourist Board communication concept #CroatiaLongDistanceLove.

“Former Belgian Genk footballer Frane Bućan commented on the current situation in our country for Belgian television, pointing out that Croatia organized excellent defense against the coronavirus and that Croats were extremely disciplined in implementing all prescribed measures.” – said the director of the Croatian National Tourist Board Office in Belgium, Ivan Novak.

They also point out that the well-known fashion magazine, Paris Vogue, published a photo of the diving board at the Kolovare swimming pool in Zadar on its Facebook profile, which is followed by more than five million people, with the description “a sunny afternoon in Croatia sounds ideal”.

The author of the photo is famed photographer Cameron Hammond, who described the creation of this idyllic photo as follows: “Many ask me if the scene was directed. My wife Rachel and I visited Zadar for the first time and watched the children jump into the sea for hours. Rachel went for a swim and stopped to get a better look at the diving board, and I just caught her with my camera.“

Croatian National Tourist Board Director Kristjan Stanicic is satisfied with the recent announcements about Croatia in prestigious foreign media. “Positive announcements greatly contribute to the image of our country as a safe destination and increase the visibility of Croatia on the tourist map of the world. We hope for the positive trends to continue, but also for the arrival of guests in our country when all the necessary conditions are met.“, said Stanicic.

The Croatian National Tourist Board reported this week that they had prepared four new videos for social networks on the topic of gastronomy, natural beauty, active tourism, and culture, through which they continue to implement the new communication concept #CroatiaLongDistanceLove. The first video published on social networks was on the topic of natural beauties in Croatia.

The #CroatiaLongDistanceLove concept has so far been viewed by more than 1.5 million users, with the most views and comments in the markets of Germany, Italy, Austria, Slovakia, the Czech Republic, and Slovenia.

The video has been viewed more than 40,000 times on YouTube, while the #CroatiaLongDistanceLove tag has been used more than a thousand times on Instagram.

The number of fans on ‘Croatia Full of Life’ channels has been growing in the last month. For example, in April alone, they reached almost four million people on Instagram, more than nine thousand comments, 740,000 likes, and more than 5,000 new fans said the Croatian National Tourist Board.